Ampfield Golf Course is now open and welcomes you back. Please ensure you pre book your ‘T Times’. COVID-19 guidelines in place to keep you safe.
MENU
Book a round 01794 368480 CALL 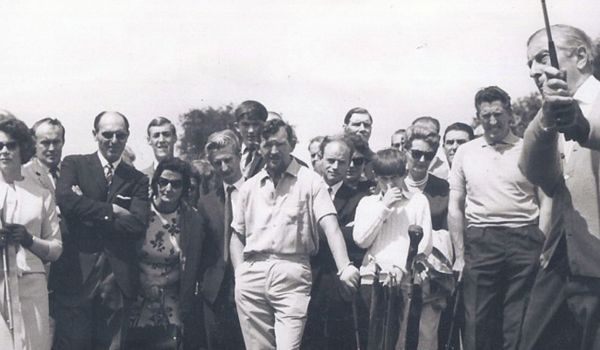 Ampfield Golf Club was incorporated on the 1st May 1963, with the original subscribers to the Memorandum and Articles being Mr A.J Baker and Mrs S. Bell. The incorporation was solely for the purpose of developing a Par-Three golf course and country club situated at Home Farm, Ampfield, the purchasing of this property having already been successfully negotiated.

As it was necessary to obtain Planning Permission prior to the commencement of the construction of the course, the date on which the company would commence trading was left in abeyance. The initial planning was turned down on the basis of access, so an appeal was lodged which delayed the course construction until early 1964. The appeal was of course successful and the company commenced trading on the 23rd August 1964.

The course was designed by Sir Henry Thomas Cotton, MBE and constructed by Hamilton Stutt.

I do not know in the whole of Europe a par three course of a similar type to the one to be found at Ampfield. When Mr Baker asked me to study the question for him I immediately saw in mind the course I had always wanted to design – a top class par three, so that the golfer could have a chance to play all the shots.

Now it is a dream come true; from the pretty meadow land of what was formerly Home Farm, has been created a complete golf course with undulating greens, well designed sand traps and strategically located trees as additional hazards. Thus, history has been made and Hamilton Stutt, my colleague on the construction side, and I look back on our hard work with great satisfaction, knowing that thousands of golfers will before long have enjoyed playing this testing little golf course.

This course is not a trick one; it is the sort of course I myself can enjoy playing and when I feel this is so, I know I have succeeded.

Ampfield Par Three Golf and Country Club will be a showplace before long and one the County of Hampshire and Britain can be proud to have.

The best hole? – there is not a bad one, I hope! They are all good, but the toughest is number fourteen, I figure, but experience will show which hole causes the most trouble.

Sir Henry Cotton was born in Cheshire on the 28th January 1907. A prestigious cricketer while attending Alleyn’s School in Dulwich, South London, he and the other non-prefects were ordered by the six prefects in the school team to transport their cricket clothing back to the school on public transport. After returning to the school, he wrote a letter to the headmaster explaining that he was not amused. The headmaster ordered that he be caned in punishment, but Cotton refused. Resultantly banned from the cricket team, Cotton and his brother took up their second sport golf at the Aquarius Golf Club from 1920. In 1923 Cotton won the Hutchings Trophy, the club championship. The brothers left in 1924 to become professionals.

Cotton started his career as a professional golfer at the age of 17, and was known for working extremely hard at his game, often practising until his hands bled. Cotton placed great emphasis upon accuracy and differed from modern golf teachers in the great emphasis he placed upon the role of the hands in the golf swing. Although emphasis was given to a correct grip, he also emphasised the need to build up the strength of the hands and forearms. The competition golfer, equipped with such assets could counter an off centre strike off the face of the club and still achieve a powerful, yet accurate shot. He also stated the need to “educate the hands” in that the competitive golfer had to achieve an awareness of the position of the hands during the golf swing itself, something modern teachers have not stressed greatly, preferring a more passive role for the hands.

He achieved fame during the 1930s and 1940s, with three victories in The Open Championship (1934, 1937, and 1948). His record round of 65, made during the 1934 Open Championship, led to the Dunlop golf company issuing the famous ‘Dunlop 65’ ball. Cotton placed 17 times in the top-10 at the Open. Cotton also succeeded in winning many titles on the European circuit during the 1930s. During this period he was a professional at the Ashridge Golf Club.

Following his retirement from competitive golf in the early 1950s, Cotton became a successful architect of golf courses, including designing the Le Meridien Penina on the Algarve, Portugal and Ampfield Par Three Golf and Country Club in 1964. Cotton wrote 10 books, and established the Golf Foundation, which helped thousands of young boys and girls get started in golf.

Cotton loved the high life, including champagne, caviar and bespoke tailored clothes. He lived for a while in a suite in a 5-star hotel, and later bought an estate complete with butler and full staff, traveling everywhere in a Rolls-Royce.

He was inducted into the World Golf Hall of Fame in 1980.

Cotton was knighted in the New Year’s Day Honours of 1988, named a Knight Bachelor. This was reported in some media as a “posthumous knighthood” because he had died by the time it was publicly announced. However, he had accepted the knighthood before his death, and it was made effective from the date of his death.

Why not book a round

Simply click the button alongside to use our online booking system

This website uses cookies to give you the best possible experience. If you continue without changing your settings, we'll assume you're happy to receive our cookies. You can change your cookie settings or find out more at any time.

Summer is on it’s way and our popular Pizza Nights will be back every Thursday from 15th April 2021. Enjoy tasty pizza cooked in our traditional pizza oven.
Find out more